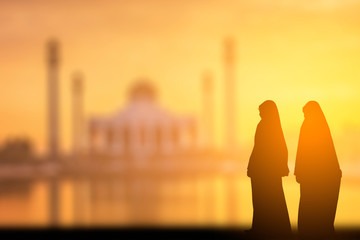 Hijab: Fard or the fad

Now a days hijab is becoming a symbol of fusion and fashion more than just a religious commitment. Well I’m not here to write in a judgemental way but i do wanna jot down about the how religion is portrayed on fashion runways and how it be should be done? How much we’ve transmuted toward the life of vogue and to what extent it’s considered virtuous?

Not just a piece of cloth:

Literally if we talk about hijab, it’s a dress code that is usually worn by the Muslim women to cover their head and hair, right? Most probably if we look upon media, hijab is conveyed by the snaps of girls covering head. But do you think it’s just a piece of fabric? No, not at all. It goes beyond the head scarf. It is a way of livelihood, a sense of protection, identity improviser, preserver of beauty and morality, confidence builder, state of honor, cultural solidarity and of prime importance it is an illustration of devotion and commitment to propitiate Allah’s SWT.

Even in the Quranic verses it is not mooted as a head piece but in the context of shield or a screen.

“And when ye ask of them (the wives of the Prophet) anything, ask it of them from behind a curtain. That is purer for your hearts and for their hearts.”

The thing here arises why actually Muslim Girls wear hijab? The purpose is very much explained in most of the Quranic versus such as in Surah Al Ahzab that states:

“O Prophet! Tell thy wives and thy daughters and the women of the believers to draw their cloaks close round them (when they go abroad). That will be better, so that they may be recognized and not annoyed. Allah is ever Forgiving, Merciful.”

The quintessence of entire is that hijab is worn among Muslim women in order to be known. In order to protect their chastity and dignity. To fortify themselves from catcalling. Since we all know that woman’s beauty manifestation can kindle the sexual desire of the opposite gender. So, we can say so that it act as a barrier against sexual assault, rape, molestation or any abrupt situation.

Evolution in the term “modest wear”:

From years and years ago hijab has been considered as the modest wear but the definition of modesty has barely changed with the time period. Mindsets are inculcated with the phrase ”to be modern is to be fashionable” and with the rise of trend and style, hijab has been transformed from religious obligation toward a fashion statement.

Over time islamic fashion marketing has become a trend. It is now ubiquitous. Many commercial brands and fashion houses like H&M, Tommy Hilfiger, Dolce & Gabanna have taken up the modest clothing in order to target the Muslim consumer’s and to fill the gap in the market of Muslim community. But do you think why they are doing it so? Are they the well wishers of the Muslims? Are they breaking the wall of hatred amd stepping toward amity. Nope!  They’ve Intervening just because Islamic fashion is now appraised as a lucrative universal industry. And with the leap up of Muslim clients there brands are getting profit. In addition they are just trying to remove our identity by upholding on our own trends.

As we all know Muslims are most commonly considered as the oppressors worldwide. Muslims are bracketed within the deteriorating terms like Xenophobia, Islamophobia, Terrorists but In edge, despite of all, Islamic fashion clothing has now transcend the national boundaries and global image of Muslims as a terroristic community has revamped. With the breakage of stereotypes Muslims are not at the marker of oppression or passiveness now and the division is not ponder as west vs rest now.

Islam is a religion of balance and restraint. Though there are some personal parameters and boundaries but neither it has restricted us to step up nor prevent us to acquire a modest lifestyle. It gave us an opportunity to be ourselves. It advanced that as a person we don’t have to live according to Society expectations. We don’t have to show our beauty to get the acceptance. There are alot of Muslim women that are managing to set themselves as an examples while upholding their Islamic symmetry.

But undoubtedly with the growth of social media blogger’s, YouTuber’s, Instagrammer’s, Snapchater’s, Hijab and veils are obtaining pre-eminence and have lost it’s religious meaning. People including me are getting more influenced by so called Modest wear. We can’t help it, we’ve wholly fallen for this. We are not apt to understand the superficial meaning of modest wear. We don’t understand that due to commercialism, the sanctity of hijab has astrayed. We can rock our religious attire within set guidelines but unfortunately we are turning toward Extravagance. We are crossing the line of moderation and are uprising on flawed inaugurations. And with grave sadness i need to say that we are the one that are mentioned by Prophet Muhammad SAW that there are women who are both “covered and naked at the same time”.

Surely Allah has instruct to cover ourselves fairly and leaves the choice up to us that how we cope the meaning of modest wear. We can shine with glitz and glam but with a little responsibility and by remaining under our personal limitations. We all are the mentors and can admit out influence.

Disclaimer: To wear hijab or not is a peculiar choice of an individual. Don’t judge how religious the other fella is by their appearance yet there are some who wears hijab but defy the other commands of Allah SWT and there are some who do not cover their heads but fulfill other obligations with enthusiasm. Don’t try to impose your ideas on others rather than set yourself as an exemplar.

If you are convinced and want to adopt Hijab and are looking to find a suitable Scarf for you then you can visit our online shop at scarf.pk

0
Open chat
1
Powered by
Assalam o Alikum
Do you need any Help. Just send us a message and we will get back to you